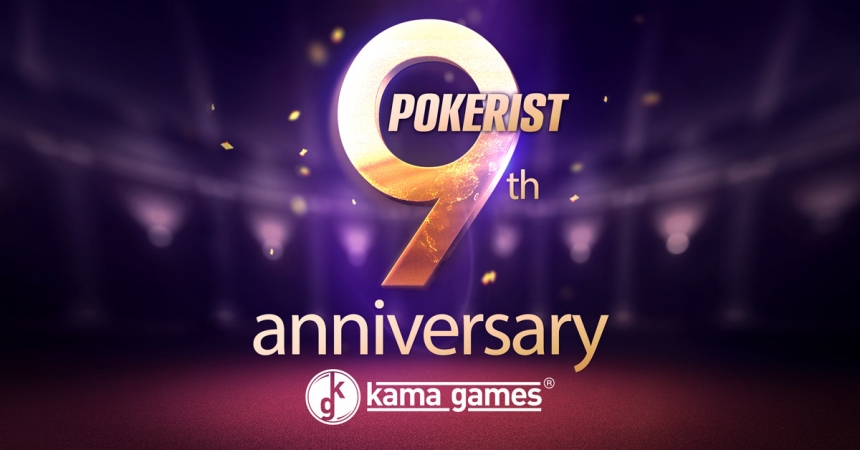 KamaGames are proudly celebrating Pokerist’s ninth year of innovation and gaming on the social casino landscape.

In the nine years since its launch, Pokerist has grown from a single title with simple, straightforward gameplay, to unquestionably one of the most diverse social mobile poker apps worldwide.

Today, Pokerist has been localised into 28 languages and played competitively across no less than an impressive total of 233 countries. KamaGames attributes this success to a constant focus on innovation, along with the regular release of exciting new features and games that keep players engaged and entertained.

The latest update to the game sees the launch of personalised avatars in June 2019.

With the ability to select gender, hairstyle, hair colour, eye colour and skin tone, players are able to create an avatar that’s as unique as KamaGames’ portfolio of social casino games. Once an avatar is designed to fit a player’s exact specifications, they’ll have the opportunity to clothe them with a wardrobe worthy of any high roller.

This unique avatar constructor can only be found in the Pokerist app, showing once again, that the company is at the forefront of innovation in the social casino genre.

In 2018, KamaGames announced the introduction of their innovative Party modes to Pokerist and have since built a portfolio, set to both challenge and entertain its millions of players.

Along with this latest Party mode, Pokerist also released the Party mode MTT alongside the Omaha Poker MTT. Available now, these two inventive new tournaments combine successful gaming mechanics such as MTTs and Party modes, along with Omaha Poker.

In the Party mode MTTs, there will be four kinds of tournaments available to players, each with its own specific rules and special twist. These MTTs are titled Joker, 10 to Ace, Pair and Hearts.

In the first half of 2019 alone, KamaGames undertook a number of significant expansions and updates to Pokerist, including making its hit games available on Facebook Games.

Developed on the Unity engine and using WebGL technology, KamaGames not only made their two headline titles, Pokerist and Blackjackist, available via this latest platform but also expanded this availability to other popular titles. The company is confident that Facebook Games can be a strong vehicle for growth for KamaGames and intend to develop their offering on this platform in line with the company’s mobile counterparts.

Along with this new expansion, KamaGames has recently updated the Poker Night in America app, allowing fans to play popular Multi-Table Tournaments and access the latest additions to the company’s growing portfolio of Party modes. KamaGames is delighted to see this further success of the television series and the positive impact this has had on driving players to the Poker Night in America app.

As we look to the future, KamaGames is fully committed to maintaining the standard of gameplay we’ve built up over the last nine years as well as the regular roll-out of high-quality, expertly executed games.

Last year we committed ourselves to building on our already vast and innovative portfolio of games through our Pokerist app and thanks to the hard work of the KamaGames team in the first half of 2019, we’re certainly on track to deliver on that commitment.

All of KamaGames’ latest new games and features will be available for free when you download the Pokerist app, available here: https://pokerist.com/play.