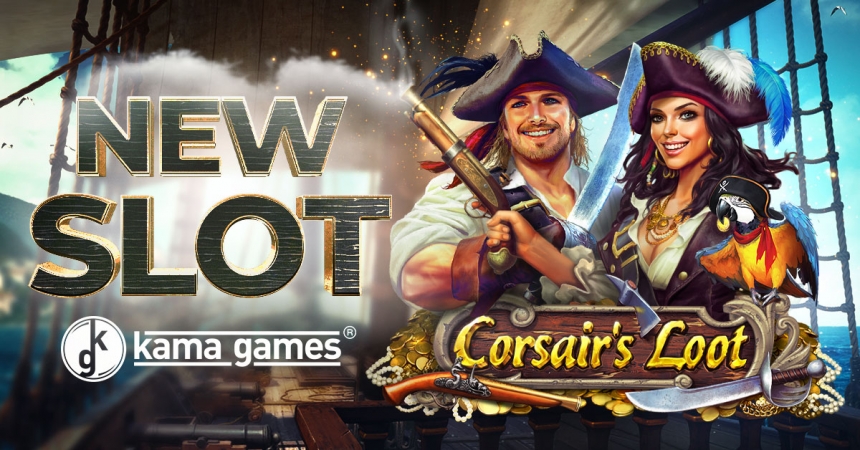 Today, KamaGames is pleased to launch Corsair’s Loot to our growing Slots portfolio.

As the name suggests, a swashbuckling adventure awaits the players of this thrilling new launch. Throughout their exciting ventures in Corsair’s Loot, players will cross paths with fearsome pirates, intriguing quests and mesmerising treasure.

The main feature hosted in this new slot is PIRATE WILDS! When players come across this intriguing feature it substitutes all symbols on the reel. Should the PIRATE WILD symbol drop, it not only offers players respins but an increasing winnings multiplier! These respins will only finish for two reasons. Firstly, when there are unfortunately no winnings accumulated from the spin. Secondly, they’ll end if the haunted pirate ship sails beyond the borders of the frame of the slot.

The fan-favourite feature Free Spins is also available in this latest slot. Players will be happy to know that they can collect three free spins when the barrels have been filled with gold. Each WILD symbol on the reels equates to one point filled on the barrel bar. A player’s reward for being successful in this area of the game is calculated based on the average bet on the spins that filled the barrels.

The decision to launch Corsair’s Loot next in our portfolio was led by our KamaGames community. This decision followed a spirited social media campaign where players passionately voted for their preferred game. KamaGames believes that player feedback is integral to the continued success of our games and thus, is pleased to have our players influencing our future releases.